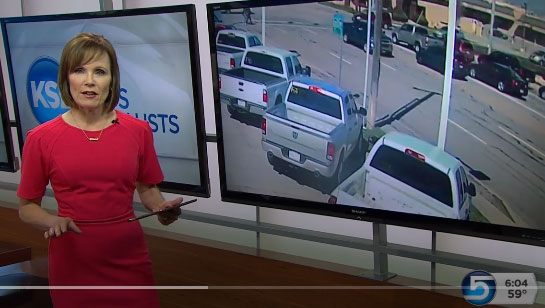 Surveillance video is providing police with more details about how two 13-year-old girls were hit by a minivan while walking in a crosswalk Tuesday afternoon in Taylorsville. The girls were alert and talking after the incident and reported to be okay.

The video, provided to KSL by SentraCam, shows the girls about halfway across Redwood Road at 4200 South when a minivan makes a left turn and hits both of them—sending them onto the hood and then to the ground. The vehicle then moves forward toward one of the girls lying on the ground.

The Unified Police Department says the girls had the right of way and that the pedestrian signal had indicated that they could cross the busy intersection. The driver, who had a green light, had the responsibility to yield.

The incident is also raising questions about Utah’s regulation of driver’s licenses after the driver said he didn’t see the girls crossing the street because he is blind in his left eye.

“The girls must have started crossing and I didn’t see them probably because of my vision impairment,” said Louis Truffa, the driver of the minivan.

Truffa is seen in the video trying to help the two girls and police say he is cooperating in the investigation.